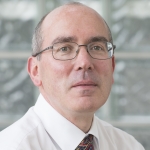 Nigel is Chief Executive of the Scottish Hydrogen and Fuel Cell Association (SHFCA), recognised as one of the most proactive hydrogen & fuel cell industry associations in Europe. SHFCA has over 80 members mostly in Scotland and UK but an increasing number of members from overseas with many involved in Scottish activities.

Scotland is one of the leading locations in Europe for deployment of Hydrogen and Fuel Cell into developing low carbon energy systems. Highlights include the expanding hydrogen bus fleet in Aberdeen and the Acorn project at St Fergus, hydrogen vehicles in Fife and plans for a 100% hydrogen demonstration network, and innovative projects in the Western Isles. The Orkney Islands are widely seen as exemplar clean energy islands, and are host to an increasing portfolio of hydrogen projects including the FCH-JU supported BIGHIT, the H2020 supported HySeas III development of the world’s first ocean-going roll-on-roll-off hydrogen ferry, Surf ‘n’ Turf, HyDime, ITEG, ReFLEX, as well as the iconic HyFlyer and HySpirits projects.