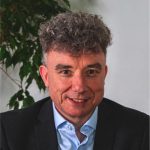 Mike is responsible for leading and overseeing the innovation and business development activities of Alstom in the UK and Ireland. Mike has worked in the rail industry since 1989 starting his career designing trains for the UK, Europe and Asia. He moved into project roles running a number of rolling stock and signalling projects for Alstom in London before becoming Tenders Director for Alstom UK&I in 2010. In 2017 he took on his current role, with the specific additional remit to promote and apply Alstom’s decarbonisation and hydrogen train technologies in the UK market.

Mike will give an update of progress in rail applications for hydrogen both in the UK and around the world.  Using examples of Alstom products in production , we ask where is it happening and how soon will they be in service?