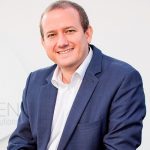 Mr Thomas started his career in the photovoltaic (PV) sector in Belgium advising the government about the launch of a new support scheme to develop solar PV in Wallonia, the south part of Belgium. Then, he has worked for the European Photovoltaic Industry Association in Brussels as solar PV market an industry analyst and participated to the SET FOR 2020 strategic study which aimed at producing 12% of the European electricity from solar PV by 2020. Then, Mr Thomas has worked several years as Sales Manager for a major solar PV EPC (Engineering Procurement and Construction) company in Belgium, mainly focused on MW size rooftop PV systems. During his solar PV career, Mr Thomas has been particularly active in market development activities and strongly implicated in the various renewable energy associations at Belgian and European Level.

Mr Thomas joined Hydrogenics in 2014 and is leading the Global Business Development activities for water electrolysis. Hydrogenics is a world-wide leading provider of hydrogen generation products (electrolyzers) for industrial, hydrogen fueling and energy storage applications. Hydrogenics has been implicated in the majority of the Power-to-Gas projects in Europe and is a reference manufacturer of alkaline and PEM electrolyzers worldwide, as well as PEM Fuel Cells.

Since September 2019, Hydrogenics is part of the New Power Business of Cummins.

Mr Thomas has a specific focus on the Cummins hydrogen activities in the energy sector: such as Power-to-Hydrogen, Power-to-Gas, Power-to-Mobility, Power-to-Fuels and Power-to-Industry.